Research by the eNunciate Team
Other Research
Case Studies

The eNunciate site explains the mechanics of accurate pronunciation in its tutorial videos in a way that’s easy for students to understand.

Misuzu Kazama taught this 3rd year Japanese course for the first time in Summer 2015. Misuzu showed an interest in using the eNunciate Japanese video tutorials, noting: “Some students do not notice their native language interference. Therefore they keep studying Japanese with their pronunciation unfixed without knowing that some pronunciation is wrong. In the long run, these incorrect pronunciations may get fossilized and gradually become more difficult to correct.”

The course was a face-to-face thematic semi-content-based course designed for students who wish to develop linguistic and strategic competencies in reading and writing modern Japanese prose at an advanced level. There were 7 students. Although the course is a reading and writing course, Misuzu also emphasizes that good listening and speaking skills are essential for successful performance in this course. To improve students' phonological awareness and to improve their fluency in Japanese, students were required to practice reading texts out loud for two assignments. Each student was required to record their own reading on the Collaborative Learning Annotation System (CLAS). Similar to the learning technique known as Shadowing, students were required to mimic Misuzu's (expert) speech, which was shared through CLAS. Each student was also asked to record their most satisfactory speech and share it with the instructor for feedback. Misuzu watched and provided written and/or video feedback on students' recordings through CLAS. Whenever Misuzu noticed mispronunciations in students' CLAS recording assignments, she included links to the relevant eNunciate resources in her feedback using the annotation tool in CLAS. 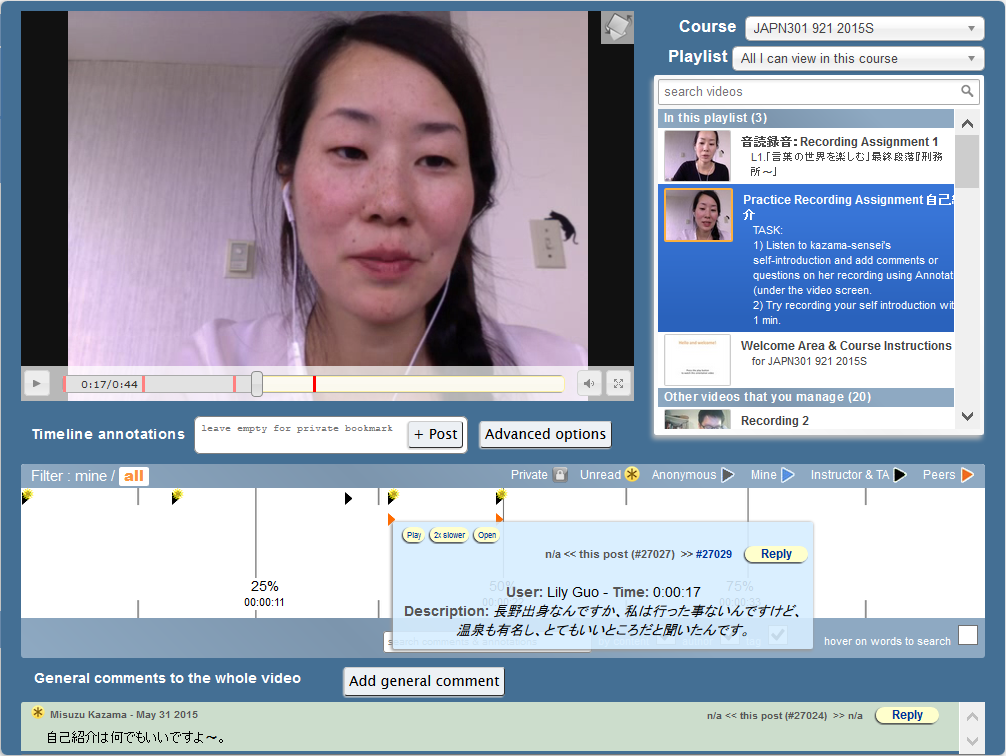 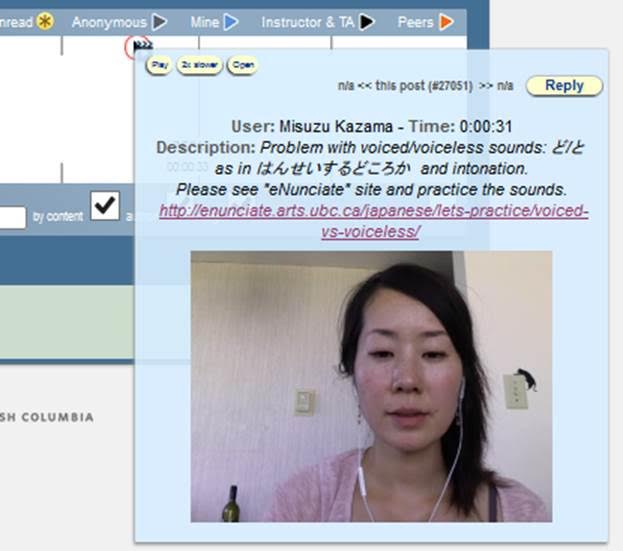 After the first recording assignment, because of my feedback and eNunciate guidance, some students noticed their native language interference. After being asked to use the eNunciate materials, these students showed significant improvement in their reading fluency when reading the same paragraph out loud on the second recording assignment. For example, the majority of Mandarin-speaking students had difficulty differentiating between voiced and voiceless sounds as well as between long and short vowel sounds in Japanese, and one Korean-speaking student had difficulties both with pitch and with some sound differences between her native language and Japanese. The eNunciate site explains the mechanics of accurate pronunciation in its tutorial videos in a way that's easy for students to understand. This helps students' awareness of their own pronunciation problems. Moreover, by allowing students to watch the videos at home, eNunciate also saves instructors the time and effort that might otherwise be spent teaching pronunciation in the classroom.

Misuzu finds the Japanese online tutorials at the eNunciate site useful the way they are. She also reported that CLAS was a great tool because it allows both recording of student speech and feedback through the annotation tool. This system is especially convenient for students who shy away from having their face recorded. Besides a recording assignment through CLAS, some pair work or group work in class would also work for pronunciation learning. Students would be able to check their pronunciation with each other if they are grouped according to their native languages (and hence the pronunciation difficulties they are likely to face).

Students like having online reference materials that they can refer back to at any time.

Over her career of teaching Japanese, Asami has noticed that students make similar pronunciation mistakes over and over. She notes that in many cases, students have difficulties articulating some sounds because those sounds simply do not exist in their native languages. She has been looking for ways to help students overcome those barriers, but it has not been easy due to limited class time and a lack of resources.

As a co-principal investigator of the project “Multimodal approaches to the empowerment of pronunciation teaching and learning: Creating online interactive tutorial videos” (eNunciate project, in short), Asami led a Japanese pronunciation pedagogy team and created a series of videos designed to improve students' Japanese pronunciation and intonation, and implemented those videos in her courses JAPN102 and JAPN103.

JAPN102 and JAPN103 are the 2nd year Japanese courses at UBC. Summer intensive courses run 4 hours per day for three weeks. The student cap for both courses is 24 students. The course aims to increase students' abilities to use Japanese appropriately within its cultural context so they can use it in real life. To help students achieve proficiency in Japanese, especially proficient pronunciation, Asami created a series of pronunciation lessons on challenging Japanese sounds and intonation patterns, and she then implemented them by adopting the flipped classroom approach as well as peer learning techniques.

Students were asked to practice the pronunciation of challenging Japanese sounds and intonation patterns by reviewing video materials on the eNunciate site before coming to class. In class, students were grouped heterogeneously based on the sounds they find challenging and further practiced their pronunciation by making use of instant feedback from their peers. Asami emphasizes that creating a safe learning environment is an important factor for practicing pronunciation in class, especially in peer leaning.

To ensure that students watched all of the instructional videos on Japanese pronunciation and understood the content before coming to class, students took a low-stake quiz in class. Asami often observed students reviewing/summarizing/asking each other about the content of the video before the quiz. As part of this new educational intervention, students also completed pre- and post-treatment tests of their ability to accurately perceive Japanese pronunciation. Through the pre-treatment test, students were informed of Japanese sounds that students with their specific language backgrounds are likely to have difficulty perceiving accurately. The post-treatment test informed them of their improvement. Asami also added pronunciation as one criterion on the rubric used for oral examinations.

Evaluating students' actual improvement is not an easy task. Pre- and post-treatment tests can be used as a measure for listening skills. But evaluating actual sound production requires an expert opinion. What can be done to help language instructors observe each student's progress without spending too much time/effort?

Asami recommends giving students enough time to think about why pronunciation is important at the beginning of the course. She said, “giving them the motivation to do work outside of class is the most important step of all.”